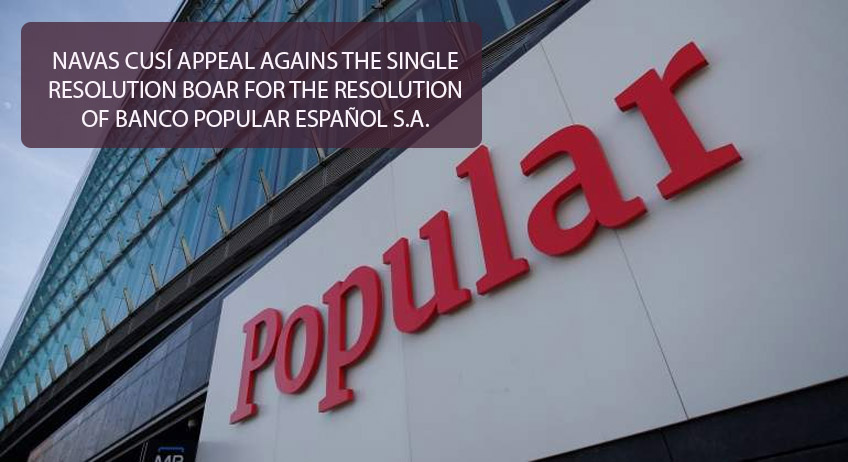 Last 19 of July Navas & Cusí, Lawyers, on behalf of several affected, has filed an appeal to the Panel of Appeals of the Single Resolution Board (SRB) in Brussels for the “Resolution Decision” of the Spanish bank “Banco Popular S.A.” agreed last June 7, 2017, notified through the FROB, in Spain.

The motivation and main argument of our appeal concerns the refusal by the SRB to make public the famous report issued by Deloitte, which explains the possible reasons why the Bank of Spain decided the “failing or likely to fail” of one of the largest Spanish entities: Banco Popular Español SA.

These appeals are therefore lodged as a “preliminary filter” and then, if it is inadmitted or rejected, we will appeal to the Court of Justice of the European Union, the highest institution responsible for the interpretation and correct application of European law and its principles. The principle of legitimate expectations of all those affected – who are not few – were violated: bondholders, preferred shareholders and shareholders of Banco Popular, who have seen their investment overnight reduced to 0.

Independently of this, the law firm established also in Brussels is already preparing the “administrative contentious appeal” to file against the Spanish FROB, before August 7, as well as the civil claims for damages and extra-contractual fault, which is known at European jurisprudence level as the prohibition of unjustified enrichment.

The reason for the appeal is simple to summarize.

Banco Popular had a market value as of June 7, 2012. On that same date, its value was reduced to zero by the decision that in the appeal before the SRB is contested. And then, it was awarded by ONE EURO to SANTANDER BANK.

As it is known, on June 8, 2.017, the shares of Banco POPULAR were worth ZERO EUROS, and had been fully amortized, claiming to be compliant with European regulations. And those of BANCO SANTANDER, between NINE in the morning and SIXTEEN afternoon hours, curiously recovered 5.29%, or what is the same, they did for a total of more than 4,900 MILLION EUROS.

That was the market value of the POPULAR Bank, and that is the unjust enrichment that its shareholders have experienced, which they have already celebrated with an capital increase carried out with an 18% discount on their value in the period of time immediately preceding, and with the perception of the dividend corresponding to the new shares issued as a result of said expansion.

Much remains to be known of what is known as “Case Bankia 2”.