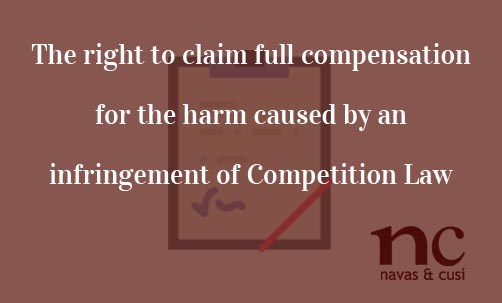 Right to full compensation for the harm

In effect, anyone (consumers, undertakings and public authorities) who has suffered damage as a result of such infringements may claim compensation for the actual loss, loss of profit and interest from the time the damage occurred until when the compensation is paid.

In particular, the actual loss can be the difference between the amount of money already paid and the amount that would have been paid if no infringement had been committed.

The right to full compensation can be brought not only by those who have who have purchased goods or services from the infringer, but also by further buyers in the supply chain.

Evidence and quantification of harm

It is true that the evidence will be an important element in the action for damages for infringement of Union or national competition law. For this reason, the Directive 2014/104/EU provides that Member States shall ensure that

“national courts are able, upon request of the defendant, to order the claimant or a third party to disclose relevant evidence” (article 5)

Provided that the viability of the action for damages is sufficiently justified.

Member States shall ensure that the national courts are empowered, in accordance with national procedures, to estimate the amount of harm if it is established that a claimant suffered harm but it is practically impossible or excessively difficult precisely to quantify the harm suffered on the basis of the evidence available.

If, on the basis of the available evidence, national courts find it excessively difficult to quantify the damage, but the claimant has proved that he has suffered it, they are entitled to estimate the amount of this harm.

It shall be for the member states to determine the time limit for bringing actions for damages, which shall be computed once the infringement has ceased and the plaintiff has or may have had knowledge of:

As lawyers specialized in European Union Law, Navas & Cusí may advise and defend –out-of-court settlements and/or in court- the interests of those people and companies that have been harmed by anti-competitive behaviours. You can contact us through our contact form or by calling +32 280 113 84